Why Cook with Cast Iron? 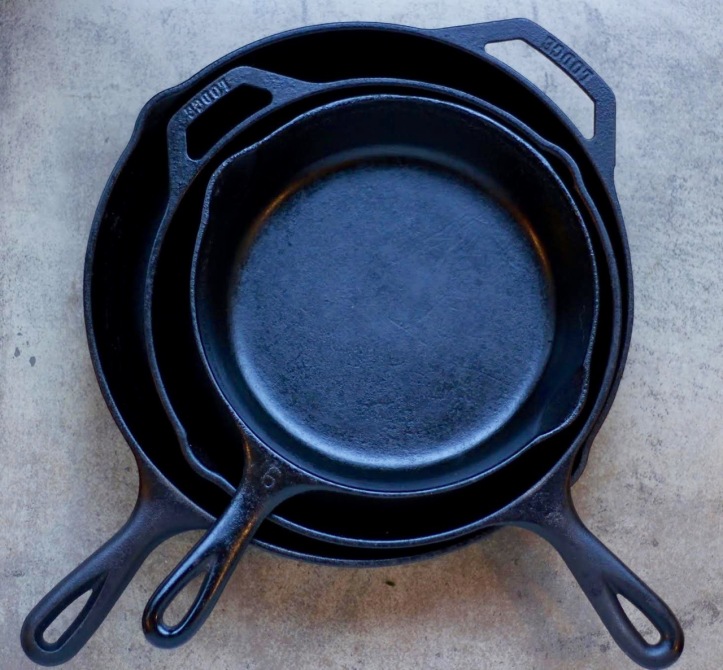 For years, the only cast iron skillet I owed was the one I purchased at a yard sale to bake cornbread. Is there any dish that shows off the beauty and utility of cast iron more than piping hot cornbread served at the table in a well-worn skillet? I think not.

But, as I have discovered, there are a multitude of other uses for cast iron. I became a full-fledged convert to these skillets when our outdoor gas grill died several years back and a replacement just didn’t seem to make it to the top of the “I need this large piece of equipment now” list. The best chefs on The Food Network cook with them. And most all of us can benefit from a little supplemental iron in our diets. Besides that, cast iron is very economical. A 12-inch pre-seasoned skillet will run about $30 at Crate and Barrel. I own a 12 inch, a 10 inch, and an 8 inch skillet. 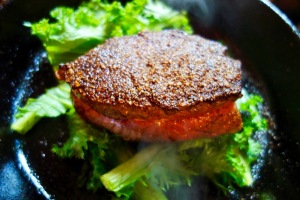 My favorite uses are: dry toasting spices (done in the 8 inch), cooking meats on the stovetop, and then being able to finish a thick cut in the oven, getting vegetables to have that nice outside crisped-up texture, or using a skillet instead of a wok if only an electric stovetop is available. Try frying bacon if you haven’t–the cooked slices remain flat because of the even heat distribution on the bottom of the skillet. Cast iron pepper bacon fried with a few potatoes and onions are a holiday staple for my boys.

What does a Nutrition Professor say about cast-iron cooking? According to Professor Roberta Anding, Baylor College of Medicine and Texas Children’s Hospital, only about 10% of the dietary iron you consume is bioavailable to the body (The Great Courses, Nutrition Made Clear, Chapter 16). Women absorb about 13 % and men about 6%. Iron comes in two sources, “heme” and “non-heme.” Heme iron derives from animal sources and is much more easily absorbable than iron that comes from grains and plants (non-heme). Professor Anding notes that cooking with cast iron can increase the iron absorption of a meal from 30 to 100%. Thus, as the nutritionist for the Houston Ballet, she recommends that the ballerinas (many of whom are vegetarians and restricting their calories to maintain their lean physiques) buy a cast iron skillet to cook with.

The heat of cast iron: Another one of the benefits is that a cast iron skillet can be heated to very high temperatures, and as mentioned above, the heat is uniformly distributed. Food at the outside of the skillet will cook as quickly as that in the middle. For this reason, the handles do get extremely hot and it takes a few minutes for the skillets to cool. Take care and always keep hot pads at the ready. Also, because of the continued high heat even after the stove is turned off, food will keep cooking if not removed from the pan. Plan accordingly.