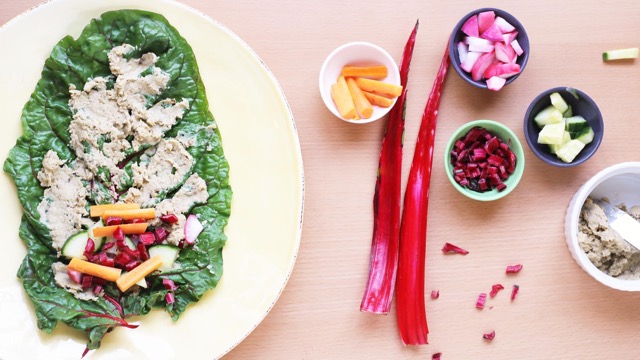 Eggplant’s net carb to protein ratio is 2 to 1 which is 50% lower than garbanzo’s ratio which is 3 to 1.

Baba Ghanoush is like a hummus (garbanzo beans) only made with eggplant–the rest of the ingredients are just the same (tahini, garlic, olive oil, lemon juice, and salt). It’s both lighter and more neutral in taste than hummus and readily takes on the flavor of the other elements. You don’t need to overpower it with another ingredient like avocado. Eggplant’s net carbohydrate to protein ratio is 50% lower than garbanzo’s–they contain lots of fiber. I usually get mine at Trader Joe’s for $1.39 each which makes it very affordable. I use two firm medium-large eggplants in this recipe.

In the Middle East whole eggplants are cooked over an open flame until the interior pulp is softened, giving the dish a delightful smoky flavor. It’s typically eaten with pita, but we eat ours in a Swiss chard wrap or as a dip with cucumbers (and with pickled radishes–recipe coming soon).

As a wrap, you can get your greens in at the same time, turning it into a light meal. Both are easy to transport for lunches or snack. For a party, cut the wraps into small sections, or spread the baba ghanoush on cucumbers with the swiss chard stems diced on top for garnish.

We have provided two stove-top methods for getting great flavor without an open flame: 1) toasting ¾ inch round slices in a dry skillet; 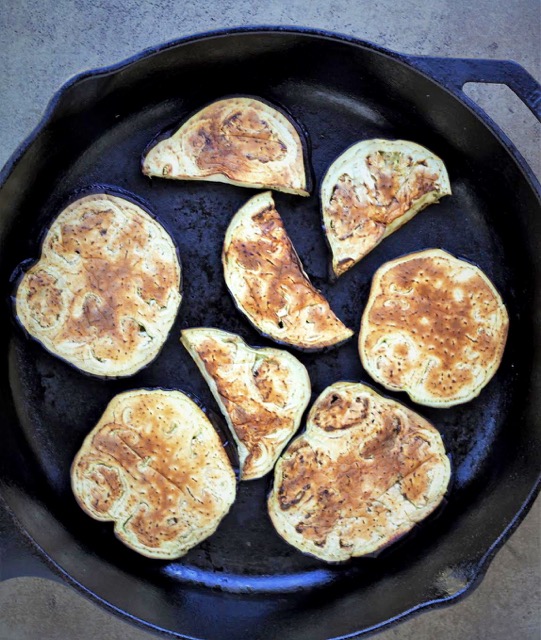 or 2) charring the outside skin in a very hot cast iron skillet and removing the interior once softened.

The first method will have more texture because the purple skin that contains beneficial anthocyanins is included. In that one we add 2 quickly sautéed zucchini to unify the consistency. The second method is a traditional smooth baba ghanoush without skin.

Both methods take a total of about 25-30 minutes (15 minutes active time). Note: I used two skillets when dry toasting because the rounds because they take up more surface space than a whole eggplant (or two). 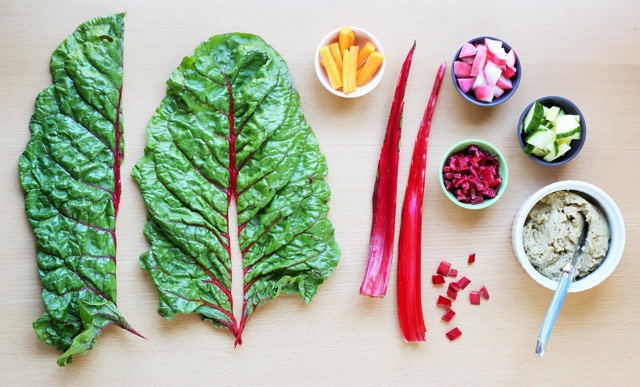 Wash leaves and remove central stem. I cut the stems into little bits to add to the wraps, which gives them a nice bite. Assemble and cut other vegetable(s) you plan on adding for crunch. Radish, cucumber, and carrot are my favorite. A healthy and pretty addition to the beige-ish baba ghanoush (they also keep well and are usually sitting in your refrigerator somewhere; this is a way to use up those ends of vegetables). 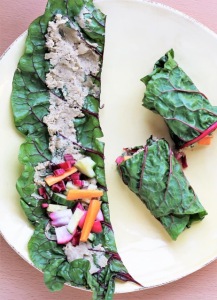 When your baba ghanoush is ready and it’s time to roll, you may do it on half of the leaf (which may be the easiest way), or the whole leaf, just overlap where the stem has been removed.

If you are doing this for a party or where others will see your components, wait to cut the removed stems into little bits until right before placing them in the assembly bowl–they get a little white coloration on the cuts after an hour. You can leave the whole stem itself out of the refrigerator for a long time though. 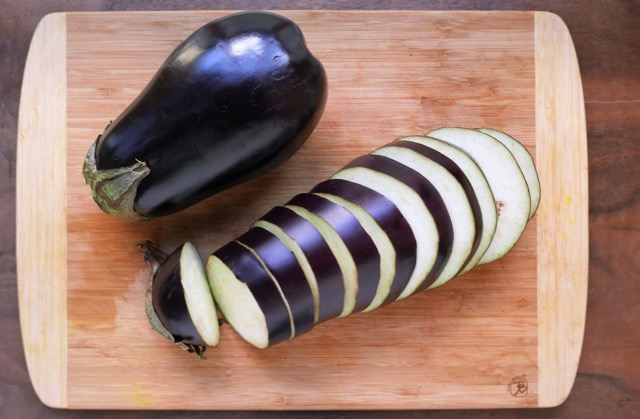 Lay flat in the skillets, cutting rounds in half where necessary to fit more in the pan. They will shrink on toasting. Once I get to the tip I make vertical cuts so as to not waste. 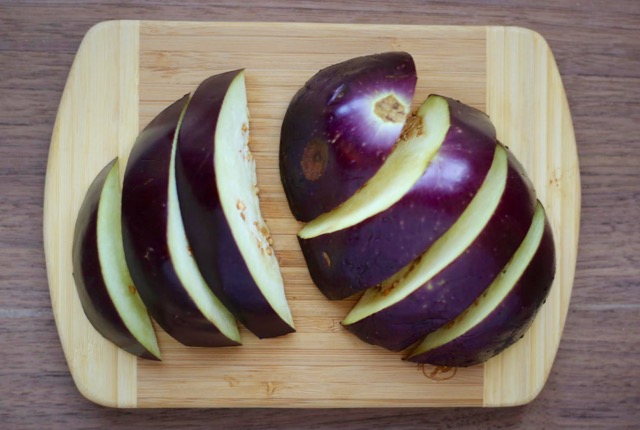 Cook until the eggplants are brown, periodically flipping them. As they shrink add more to the pan to speed process along. If your eggplant starts sticking, you can brush a very tiny bit of olive oil on on the eggplant–I use a silicone brush and never use more than 2 tsp for 2 entire eggplants when it’s necessary. You want them dry at this point to get the toasty, smoky flavor. Olive oil will come later.

While the eggplants brown, juice your lemon and mince or press your garlic.

Once they are brown remove to rack to cool, leaving one skillet on for the zucchini.  If you don’t have a rack try to find something to let air get under them, if possible. Not essential.

While eggplant cools, chop the zucchini, add some olive oil to the skillet and give them a quick sauté. They don’t have to cook long or all the way–you’re just trying to remove the rawness. I do mine about 3-4 minutes at medium heat. Remove zucchini from the pan and set aside.

Tips for combining in food processor or blender : For a blender the liquid goes in first and then the solids bit by bit; opposite for a food processor because they will leak out the bottom with too much liquid. Pouring your olive oil into the measuring cup first and then using the same cup for the tahini will make it easier to get all of the tahini out.

Food Processor: Add the zucchini and use on off pulse method to chop down. Cut the eggplants into halves and add them to the Cuisinart using the on off method. Add the remaining ingredients and switch from on-off pulse method to continuous running of the machine. Taste and adjust. Adding a bit more lemon and salt will enhance the flavor, and there is no limit on the amount of garlic in this dish. 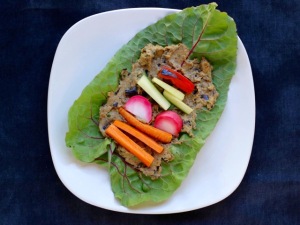 Blender: Combine all the liquid ingredients and the tahini and blend. Give the zucchini a few more chops and add those in, a few at a time, blending or puree as you go. Continue with the rest of the zucchini and do the same with the eggplant–chopping the rounds into halves or quarters first. Add more olive oil if necessary (not water!). Taste and adjust according to preference. Don’t forget adding a bit more salt and lemon juice will enhance the flavor. Add as much garlic as you like.

Overview: You will char the outside of the eggplant, continuing to turn periodically until the center becomes softened and the eggplant collapses. At that point you will peel the skin off and you’re done. If you try to peel the skin and it’s not cooked enough inside just continue cooking–the exposed flesh can also be charred. You can cut it off with a knife or if you really want to cook it down and get more of a smoky flavor, it’s fine. At that point point you can get every last bit of flesh.

Turn cast iron skillet medium-high and add your two eggplants and begin browning. Turn every few minutes so four sides have been browned–the eggplant will begin to flatten.

Continue the process. As your eggplant softens it will start to collapse and become hard to turn.

That’s ok, lower heat to medium and continue until soft.

While they char, juice your lemon and press or mince your garlic.

Remove eggplant from pan and allow to cool for a few minutes. Cut off the top of the eggplant and peel back the skin with your knife 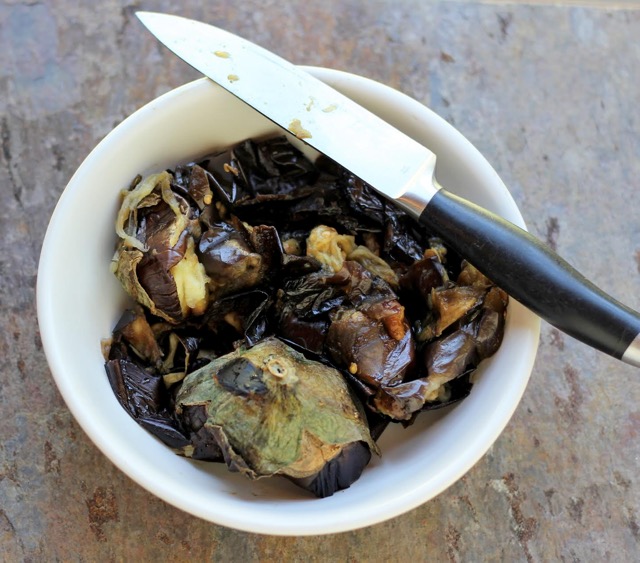 and scoop out cooked eggplant and place in a food processor. You will have about 2 cups. 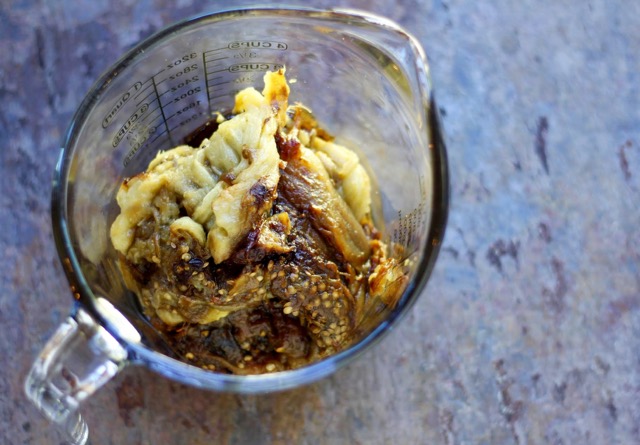 Add the remaining ingredients and combine until smooth running the machine continuously. Taste and adjust. Adding a bit more lemon or salt will enhance the flavor, and there is no limit on garlic.

If you are using a blender, then put the eggplant in a bowl and blend the wet ingredients first before adding the eggplant. Taste and adjust to your personal preference. Add a bit more lemon juice or salt to bring up flavor add as much garlic as you like. I usually wind up adding an extra clove or two during this stage–I like garlic!