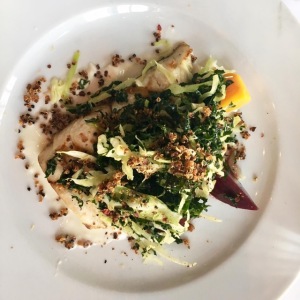 Order the fish (their fish will be better than yours and your kitchen won’t smell afterwards), and only the entre. It will be big enough. All those little plates do add up in price and often on your waistline.

I don’t travel often, but when I do I like to get the most out of my food dollars and experience. My go to: The Infatuation website. Started in New York several years back by two people who weren’t food critics and now expanded to multiple cities, The Infatuation won’t steer you wrong. Plus, it is funny. Like asking a friend who knows the city well and really likes food where to go eat. The same rule applies in your hometown if you are going to someplace new–check out the menu and photos in advance.

Eat Earlier Rather Than Later

Last month when I met my niece Shari for a weekend stay at a San Francisco Airbnb, our destination on Friday night became Zuni Cafe, after referring to The Infatuation. Even though it’s unpretentious, being housed in a triangular brick building with huge windows and having received a James Beard Award meant that Zuni Cafe was booked a month out for any weekend reservation from 7pm onward. Discovering that walk-ins could get a spot if they arrived at 5:45 (I called and asked), we figured this would actually work best for our plans to see as much of the city as possible on foot and eat great food. It also meant we wouldn’t just roll directly into bed after dinner. Net result: We ate less than if we would have lingered later into the evening, got some exercise, and saw a few new neighborhoods on way home.

Request the Waitstaff to Hold The Bread

That way it’s not wasted; anything that comes to the table must be tossed even if untouched. Beautiful aromatic bread with lovely butter is too tempting to resist for over an hour. You’re really not there to try the bread.

Ask Questions About the Food

If there are several fish entrees I am mulling over, I might ask which one is more flavorful, or lighter, or how a dish is prepared. Ingredients you don’t know? (there are so many out there now!) Let your waitperson show off his or her expertise and talk to you about the food–it’s a chance for meaningful dialogue, something beyond just service, and it can help you gain new food knowledge. Understand what you are eating and why it tastes so darn good.

Often times people confuse hunger with thirst. Drink water, and more than one glass.  Unless it’s very hot, it’s much easier to drink water when it has no ice; you are not going to be there long enough for the ice in your first glass to melt. When seated, ask if they will please hold the ice.

Take A Picture of Your Food

A beautiful plate is worth a photo, and it will be an affirming reminder of how to eat well.