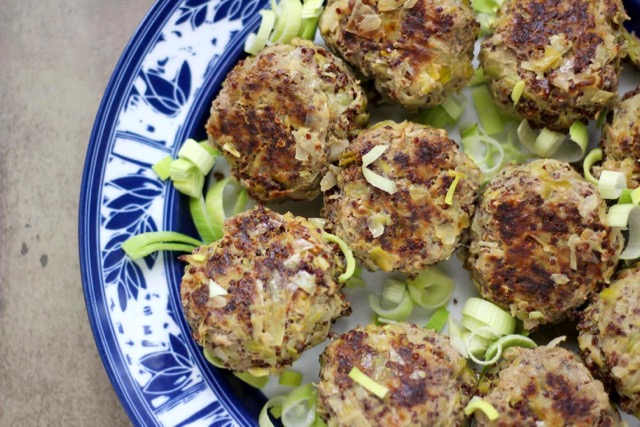 The name Yotam Ottolenghi has become a familiar one over the past several years for enthusiasts who frequently read food columns or regularly peruse the cookbook section at the bookstore. The London chef and owner of five restaurants is also a food writer for The 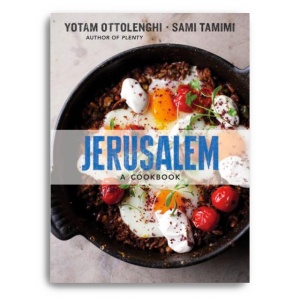 Observer, and co-author, with chef Sami Tamini, of Jerusalem–voted the Best International Cookbook of 2013. These two men were born in Jerusalem in the same year, one on the Jewish side and one on the Arab side. The Jerusalem cookbook is an exquisitely photographed story of their home city and its traditions as told through the food and tastes of this ancient crossroad.

Our light and lemony meatballs are a modification of their dish that appeared in the vegetable section of the Jerusalem cookbook. The essence of this meatball is leeks, the flavor of which is enhanced through basting in a lemon-juice broth when finishing. We have used spicy toasted quinoa instead of breadcrumbs, added a generous heaping of roasted coriander, and altered the ratios and the cooking techniques from the ones outlined in Jerusalem. 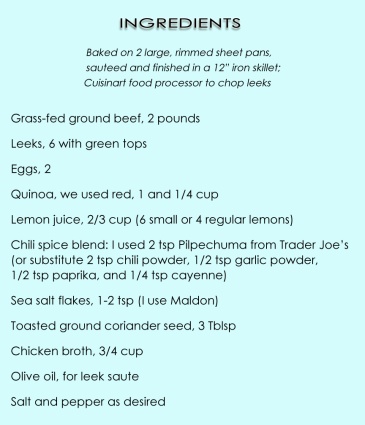 Cook quinoa on stove top according to directions (equal parts quinoa and water; bring to boil and immediately reduced to simmer, cover and cook for about 15 minutes). Let cool and spread on sheet pan lined with parchment paper.

Sprinkle quinoa with Pilpechuma spice from Trader Joe’s (or use the alternative chili spice blend listed in the ingredients).  Ottolenghi has a great recipe, too. Mix into quinoa and spread on a parchment paper lined baking sheet;

after 15 minutes, remove from oven and give the quinoa a stir and redistribute. Finish toasting for another 10 minutes (checking regularly for browning). Remove from oven.

While quinoa is toasting, prepare leeks. Give the outsides a rinse. Now the object is to find every usable portion of the leek and remove the dirt (done buy cutting lengthwise in half once the top has been removed.

Cut off coarse dark green tops, but not too far down. Unfurl what you have chopped to see if there is any usable portion on the inside layer that are brighter green and less coarse. Save those parts.

Cut down another several inches and repeat process. You should now be at the section of the leek with a bright green exterior. Slice in half lengthwise to inspect for dirt.

Cut another length down to the white of the leek. Then cut that section lengthwise and inspect for dirt. Give a quick rinse if any is detected holding vertically under the faucet. Then chop pieces into one inch sections.

Repeat this process for half of the leeks and add the small usable pieces into the Cuisinart—only fill half way up.

You may also chop by hand. Using on-off pulse method on the food processor, chop pieces until ¼-1/2 inches—you don’t want them mushy. Move chopped leeks to separate plate or bowl and repeat process until all the leeks are in small pieces. (Cuisinart chopping will take about 2 minutes total).

Heat several tablespoons of olive oil in 12 inch skillet. Add leeks and saute on medium turning regularly until they have cooked down. Turn off skillet.

Quickly toast and grind coriander seed (5 Tblsp of seed will yield about 6-7 ground Tblsp so you will have extra for another recipe).

Remove leeks from skillet and let cool on plate for a few minutes.

In a large bowl place ground beef, 2 cups toasted quinoa (you can use as little as 1 ½ cups), and two eggs. Gentle mix with forks so as not to over handle the beef. Add in leeks and continue mixing. Shape into uniform-sized meatballs and place on parchment-lined sheet pan (you can use the same parchment the quinoa was toasted on if you like). Here is where you can add a few pinches of salt and pepper to the meat mixture.

Place meatballs in oven. After 20 minutes, remove and turn meatballs over using two teaspoons to grip them with (instead of tongs) which holds meatballs together; this is optional but makes for nice rounded meatballs.

Return to oven and bake for another 10 minutes.

While meatballs are cooking, juice the lemons until you have about 2/3 cup. If they are hard, give them a little poke and place in the microwave for about 20-30 seconds.

Remove meatballs from oven and cut one open to make sure they are cooked through. If just a tiny bit of pink remains you may do the last 5-10 minutes of cook time while basting on the stove.

Add lemon juice and ¾ cup chicken broth to skillet leeks were in (no cleaning required). Carefully place meatballs in the skillet and simmer for ten minutes, turning several times and or/basting with the juice.

Place remaining meatballs in oven and repeat the process. 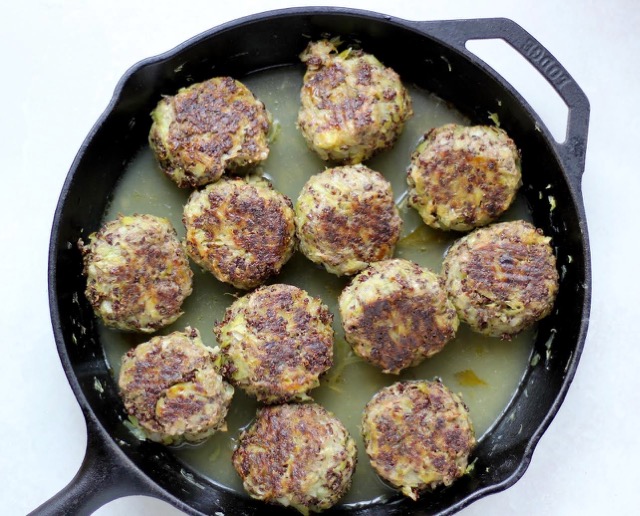 Cut a meatball open to check for that cooked through (no pink). Serve with a bit of lemon juice broth from pan drizzled on top, or in a bowl with some broth or a light curry. Eat just plain as a snack or light meal. Or serve with greens or eggs. They are very versatile and delicious cold! 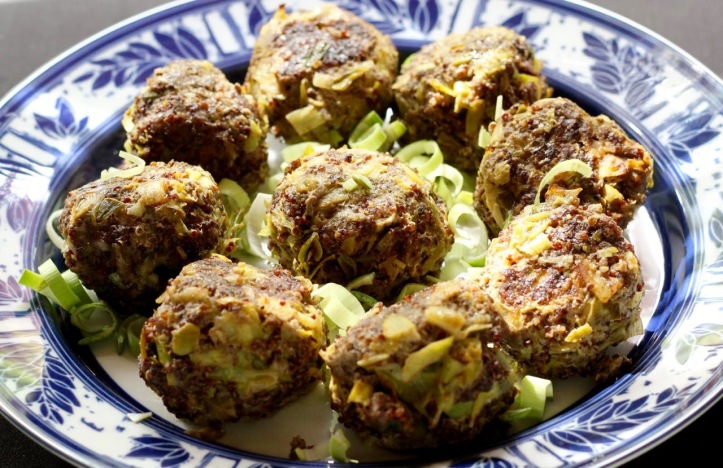