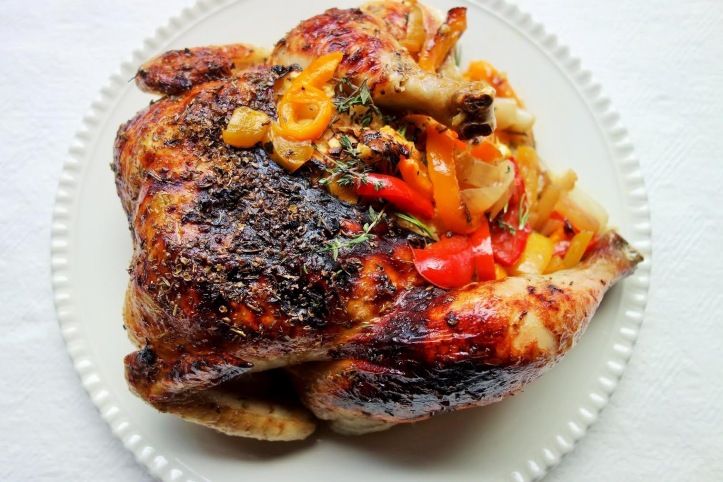 The lemon, herb, garlic (and salt) under the skin technique used this recipe is a modification of “Tamara’s Lemon Chicken,” as it appeared in Ms. Murphy’s 2010 cookbook “Tender.” This classic combination will provide moistness as well as flavor for your chicken.

Tamara Murphy is an award-winning chef, Seattle restaurant owner, writer, and regional force integrating Northwest culinary-related communities. She is an enthusiastic advocate for food, farms, and farmers in the Pacific Northwest. Her beautiful cookbook makes a lovely gift for anyone visiting our area.

We’ve added quick timing with a 450 oven and our technique of removing the backbone, an easy task that can be done in 2 minutes by you or a butcher. The backbone gets roasted in the hot skillet alongside the chicken and will be ready to add to your broth the next time you make it (once cooked we store it in the freezer in a zip lock bag). We also add sliced red onion and pepper to the outside of the chicken half way through roasting.  They make a wonderful pairing with the onion and chicken juices in the bottom of the pan.
Directions:
Follow the directions for sumac chicken prep until onions; 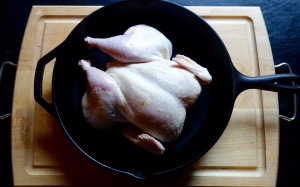 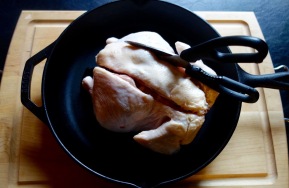 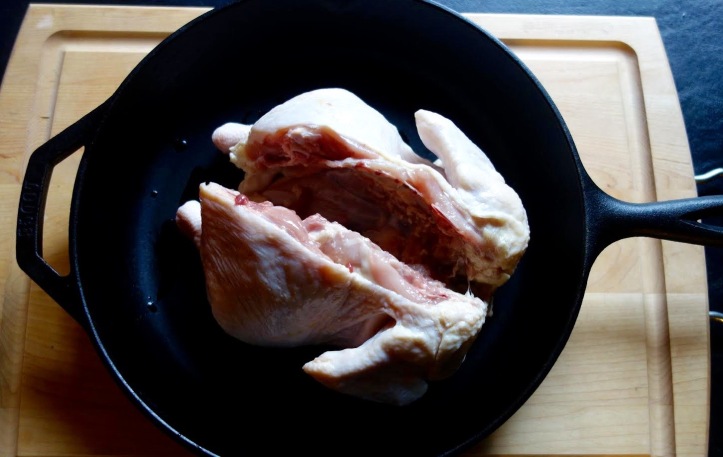 Peel and slice the onion lengthwise and place in the bottom of the pan (I used a 12” cast iron). 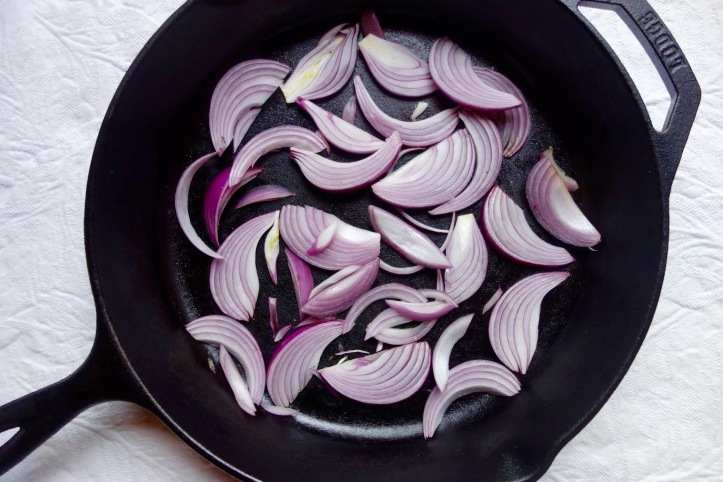 Cut two lemons into quarters or sixths and place in a food processor if you have one, otherwise chop coarsely. Remove needles from the rosemary stems (strip by placing stem between your fingers and pulling backward), and add them to the food processor or give them a chop.  Do the same with the thyme stems. Peel and add cloves of garlic to the mix–either placing in the food processor or giving a chop. Add a pinch of salt to the mixture and combine ingredients. 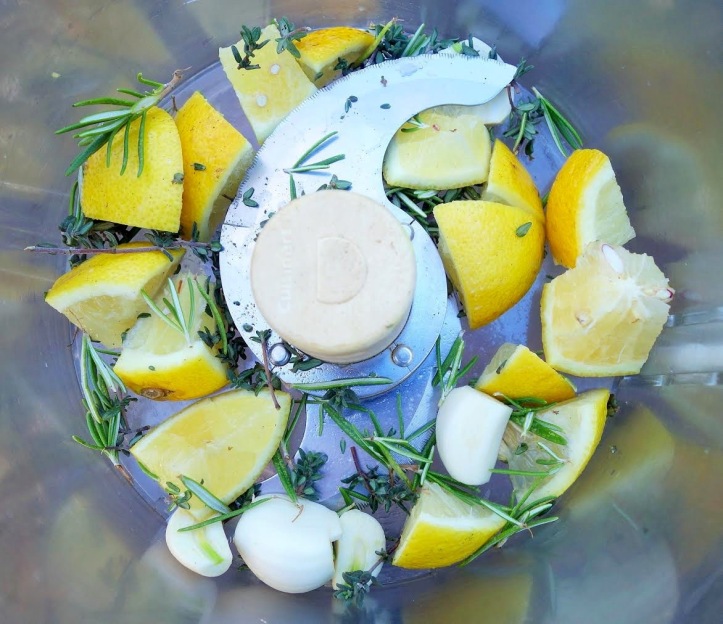 If chopping in a food processor, use the on-off pulsing method until the desired consistent is achieved.  Don’t leave the motor running–coarse is better than fine.  Hand chopping and combining will work perfectly well. 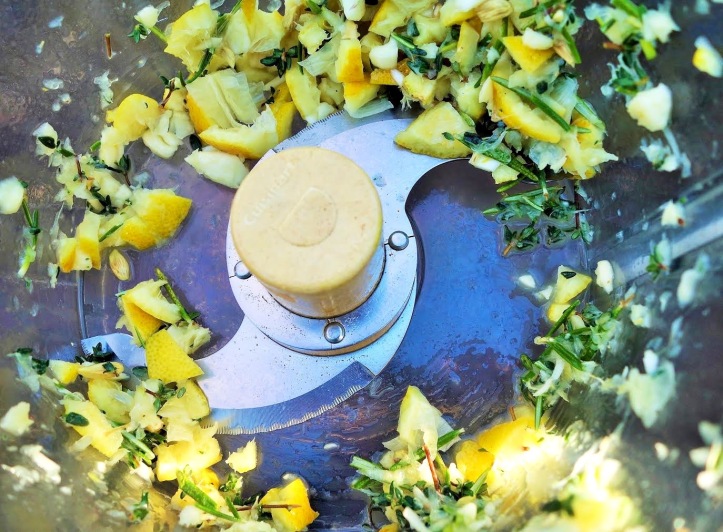 When the oven reaches 450 degrees, set chicken on top of the onions in the pan. Carefully lift the skin back from the chicken breast and stuff the lemon/herb/garlic mixture under the skin. I try to flatten the lumps of the lemon mixture once under the skin and maintain a uniform thickness. That way your skin won’t tear. If you desire, you can also insert the mixture down the legs and thigh. Any excess can just be placed around or under the bird. 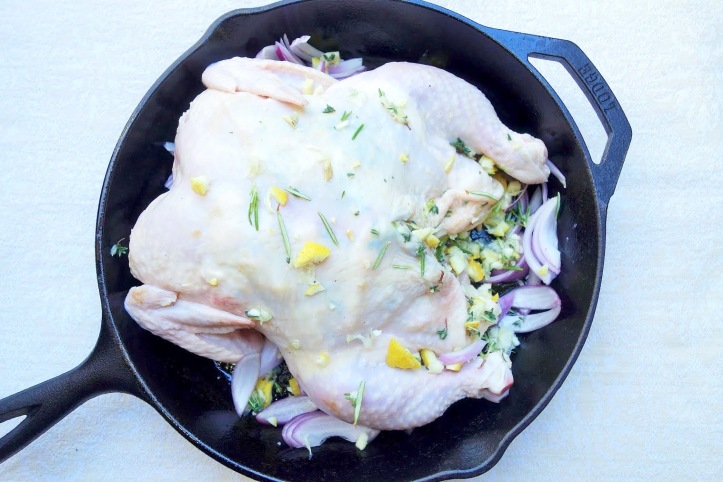 Mix the olive oil and vinegar together and brush all of the top and sides of the chicken.  Then sprinkle on the dried thyme or other dried herbs.  You may add more salt and pepper at this point if you desire. I added a bit of red sea salt. 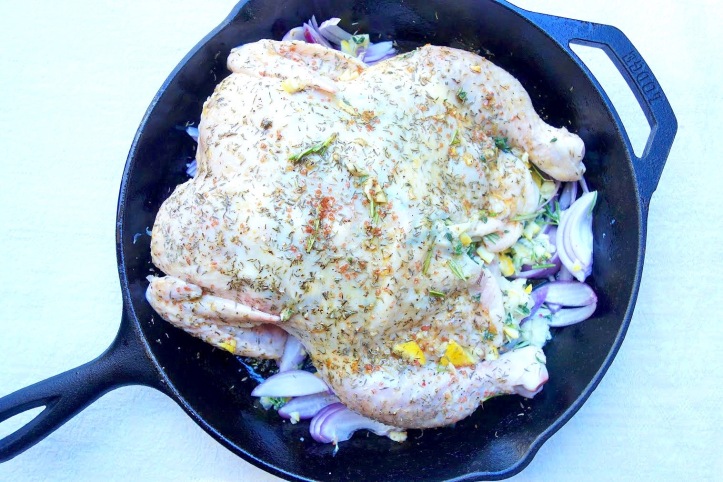 Place the chicken in the rear portion of the oven and roast at 450 degrees for 45-50 minutes.  If you are adding sliced peppers, remove chicken from the oven and place the pepper slices around the chicken after about 25 minutes.  Have your peppers pre-sliced so the chicken can be quickly returned to the oven.

At 45 minutes remove the chicken and check that the internal temperature has reached 165 degrees (food safety.gov recommendations). The juice should run clear and the legs can easily be removed when the chicken is done. Return the chicken to the oven if it is not done and check temperature again in 5 minutes. Once at 165 degree, allow it to sit for 5-10 minutes before carving. Plate the chicken, with the peppers if you added them. Using a large spoon scoop up the onions and remaining juice in the bottomed of pan and serve along with the chicken. 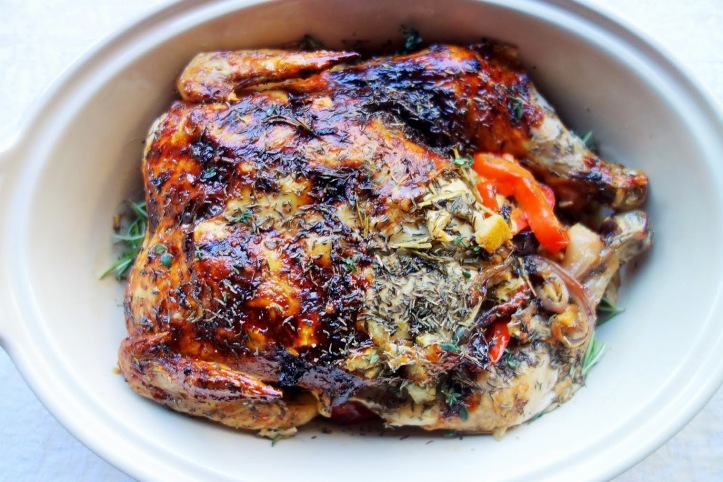